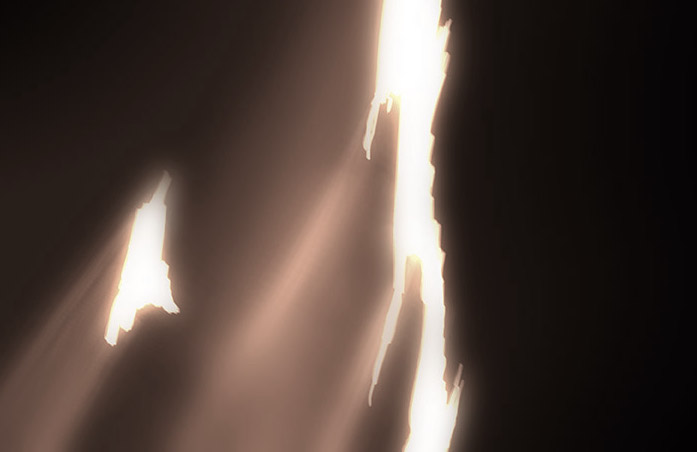 44 It was now about the sixth hour, and there was darkness over the whole land until the ninth hour, 45 while the sun’s light failed. And the curtain of the temple was torn in two. 46 Then Jesus, calling out with a loud voice, said, “Father, into your hands I commit my spirit!” And having said this he breathed his last. 47 Now when the centurion saw what had taken place, he praised God, saying, “Certainly this man was innocent!” 48 And all the crowds that had assembled for this spectacle, when they saw what had taken place, returned home beating their breasts. 49 And all his acquaintances and the women who had followed him from Galilee stood at a distance watching these things. Luke 23:44-47

Jesus inhaled His last breath and exhaled grace. The sun hid, and hope was swallowed up by the dark.

Panicking, the crowd ran down Golgotha, but those next to the cross had nowhere to go. They had journeyed with their Friend to His death on Jerusalem’s outskirts, the city that had mocked and rejected Him. So how could it be a city for them ever again? They hadn’t brought lanterns, but truly, their souls felt darker than the path before them. They stumbled through the rocks and weeds, through the broken edges of a foot-worn path whose fragments reminded them of Jesus’s torn body.

From Golgotha’s height, this temple was in view — with all its rules and boundaries and religious ones hovering near the outside, hoping to get God’s favor.

And though Christ had breathed his last on the cross, God’s presence was now forever accessible. That intimidating curtain, that “no admittance” curtain separating God’s dwelling place in the temple was torn – literally torn – in two. The Lamb had been sacrificed, His blood had been spilled, and God violently ripped the veil of separation.

His fierce longing and love for His people could never be denied, and even the hardened Centurion who witnessed it all felt Truth move in his heart.

Maybe it feels safer for you to hover from a distance than witness the ripped curtain hanging with its shreds. Maybe the rules and checklists of the Law feel less risky to your desperate heart. Or, maybe the darkness is still shadowing your hope as you stumble along a fragmented path.

But, what’s redemption without the unraveling? What’s everlasting peace without the broken, uneven path leading us there?

Friend, this Rescue Plan is for you. This intense love proven on a cross is for you.

Can you feel His pursuit?

One thought on “Preparing for Easter (Friday): The Temple Curtain”